Modeling a DDS in MATLAB

Over the last few decades, we’ve seen the analog components of electronic systems slowly shrink as digital electronics take over that space. One important component driving that evolution is the direct digital synthesizer (DDS) chip.

Because the DDS is not an analog device, there are some nuances derived from the quantized digital implementation that need to be considered in a design. For this, and maybe hundreds of other reasons, you may want to simulate or model a DDS in MATLAB. This article gives a brief overview on how a DDS works and demonstrates an idealized model in MATLAB.

The operation of direct digital synthesizer (DDS) can be simply generalized as a memory chip connected to a digital to analog converter (DAC). A very simplified block diagram is shown below.

The frequency at which the address of the LUT changes is directly proportional to the frequency of the resulting sine wave.

Because of phase quantization, for a given clock frequency, there are certain frequencies that cannot be exactly achieved. In the example later in this article, you’ll see that a desired frequency of 30 MHz cannot be achieved, and a 24.4 MHz sinusoid is produced.

More details on DDS architecture, including operational equations, can be found in this white paper published by Analog Devices.

This model in MATLAB m-code address two non-ideal effects of generating a sinusoid from a DDS: 1) phase and frequency quantization, and 2) amplitude quantization.

The frequency tuning word (FTW) can be found using the equation: 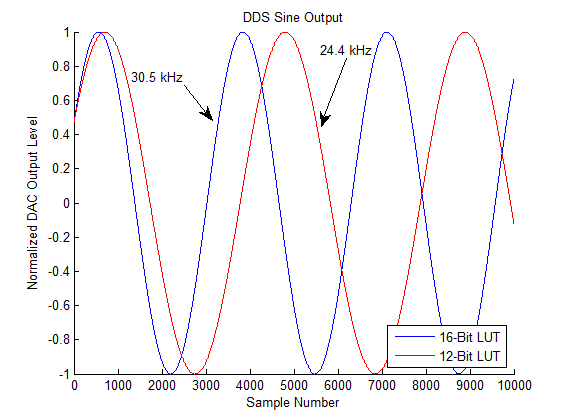 Synthesizing a starting phase of the sinusoid behaves in the same way.  The corresponding code is seen in lines 18 and 21.  Let’s say I want to start the sine wave at 30 degrees.  For a 16-bit LUT, I get 28.0 degrees–a 2 degree error.

The bit precision of the digital to analog converter (DAC) is also addressed in this MATLAB DDS model.  The number of analog voltages levels (L) that can be output from the DAC is given by L=2^n, where n is the bit precision of the DAC.  The amplitude of the sinusoid (both negative and positive) must be represented by only these output levels, so voltages levels get rounded (or quantized) to the closest voltage level.  The difference between a 14-bit DAC and a 4-bit DAC is shown in the figure below. 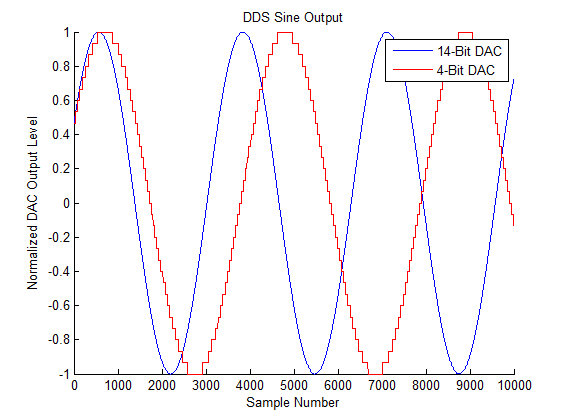 The model shown in the MATLAB code is fairly simplistic; it’s main purpose is to demonstrate quantization effects.  Other non-idea effects of concern are aliasing and the sinc output envelope.

Since the DDS is a digital system, it is subject to Nyquist’s sampling theorem.  A general rule of thumb is that the DDS can produce a sine wave of about 40% of the sampling frequency.  For example, I would not expect good synthesis of a 42 MHz wave using a sampling frequency of 100 MHz.